An English version of the callout for the weekend is here.

Twelve armored caravans loaded up with large tents and a kitchen push on late into the night. The goal is to reach a field overlooking the Colisée de la Douffine, in the hills above Pont-de-Buis. 15 km and three breakdowns later, the procession stops, the night is quiet, and it is time to build up the camp.

It is the evening of the 22nd of October, and we are in the base of the Finistère region in Brittany, a short walk from the edge of NobelSport, the principal weapons factory in the region. Tomorrow we will march to the factory and blockade it. The local police chief has responded to our challenge with a promise to prevent us from reaching the site. At the same moment, 800 km away, the family of Remi Fraisse, who was killed by the police a year earlier on the ZAD du Testet, endure a series of public offenses and prefectural interdictions. It was impossible for them to honor Rémi without being accompanied by very people who took his life. The stage was set for this anniversary to go completely unnoticed: police kill, and calm reigns.

The number for the info-line is passed from hand to hand. Our objective is to reach the meet-up point in the center of town. The gendarmerie bar all access to the town except for the south-most entrance. For two hours, the protesters are busy bypassing the police checkpoints, and filter into the main square. It is 4pm, there is close to five hundred of us. Down below, water cannons are positioned behind fences that block access to the two bridges that lead to the factory.

The trap is set, just as it was a year earlier in the streets of Nantes: a riot fence serves as the only receptacle for the demonstrators’ determination, a white screen designed to reduce their anger to a mere spectacle. At that moment, the crowd, masked and partially equipped for battle, is confronted by its own contradictions. If we don’t want to bash our lowered heads against this wall, we must choose the time and place the confrontation would take place. We must initiate a crystallization point. A challenge that often presents itself to our strategies of struggle. True, there have been attacks substantial enough to pierce anti-riot apparatuses of this sort, however nothing justifies our working away furiously on it when we’re fairly sure to fail.

Some speeches by the Assembly of the Wounded prevent an idle mood from developing, and reinvests our presence here with meaning. A fire extinguisher paints the police fence-truck bright orange, and the demo departs again to try its luck elsewhere. A tip from local villagers leads us to a bridge guarded by a much lighter force. A surge forward, and the demonstrators begin taking over the bridge, before being turned around halfway. Another fire extinguisher soaks the gendarmerie’s shields with blue paint, as a volley of stones and a barricade-turned-battering-ram begin to push back the police: we are almost across the river. Yet our goal in the confrontation isn’t to reach it, as we are not trying to enter the factory. We’re seeking gestures that accomplish something other than simply precipitating a catastrophe. Our goal is to render the factory visible and to blockade its production, which this Friday has already accomplished.

Two days of discussion and action will offer us time to put our collective intelligence to the test. The No TAV slogan, “si parte, si torna, insieme” [we arrive together, we leave together] describes the ambiance of the weekend. After the Friday demonstration, we return to the camp and spend the evening partying and celebrating the results of our first day.

The air is humid Saturday morning, s silhouettes slowly emerge from the tents erected across the field the day before. The hill opposite us greets us with the mechanical whirr of a helicopter circling in the sky above, and 110 hectares of forest that enclose the buildings of the factory. The four kilometer fence around its perimeter extends half of the length of the village. One might otherwise assume the site was the communal woods of the town, except that the residents have never been inside them, claimed as they were long ago by the weapons industry. A river marks out a frontier between the village and NobelSport, dividing our camp and its target.

We gather under the main tent, the kitchen gets going serving food, a pirate radio (“Gunpowder Radio”) broadcasts the first interviews from the day before. The discussion program calls for a presentation on police weaponry, followed by a presentation about an ambulance acquired by comrades as a means to confront inevitable injuries, and more generally to introduce the question of care into our struggles. Some locals tell the story of the factory and its explosions, its industrial risks and accidents. They tell us of the grip it maintains on village life, and share information on its operation, its security protocols and weak points. We are reminded of the opacity enjoyed by this type of industry. The discussion reinvigorates our desire to seriously investigate these infrastructures, and perhaps one day to penetrate their hearts during more decisive moments. We take the opportunity to fill our address books, nourish the confidence we won the day before, and to collectively imagine new opportunities for blockades down the road.

Later, there are discussions about struggle dynamics in Brittany, a demonstration in Landivisiau on November 14, and the tractor convoys to the COP 21 summit in Paris. In the early evening, a torch-lit march is planned in honor of those killed and wounded by the police. We know that we will find ourselves facing down the same apparatus we encountered the day before. This march will therefore serve as an opportunity to exorcise its attraction once and for all.

A fresco in homage to Rémi, some songs and readings, and we’re off. Three hundred people descend slowly toward the gates. The crowd stops as it arrives at the entrance to the bridge, with some folks sitting on the ground, others pointing green lasers at the cops’ eyes. As the readings begin, the thick mood afforded by the police barrier lightens somewhat. We are treated to stories of the daily harassment meted out against gendarmes on the ZAD at Notre-Dame-des-Landes following Operation Caesar, and stories from the mountains of the Italy of resistance against the Lyon-Turin TGV line. We talk shit to the rows of gendarmes to the rhythm of a narrative. Then it comes time to arrange our departure: we release fireworks, rockets, rain down on them with railroad ties, bolts and stones, as if attempting to shatter the screen put in place for us. In the end, Molotov cocktails send it up in flames.

As we slowly return, clamps and grappling hooks are passed through the crowd, which at this point is proceeding directly alongside the outer perimeter of the factory. Pieces of fence are ripped down, others carefully cut from top to bottom. A portable angle grinder goes to work on a gated entrance to the factory. Tear gas begins to rain down, half of it bouncing off the inner fence, before falling back toward the bewildered cops. Rocks and torn-up concrete again showers the police, with the occasional burst of flames. Finally, the demonstrators come together at the intersection of the street leading back to the camp, with a common élan: we arrive together, we leave together.

It’s the last day of the weekend, and the chief of police sets the tone: a decree stipulates that from noon ‘til midnight the police will control and search all vehicles exiting Pont-de-Buis.

At the camp everything is peaceful. As the tents are dismantled, we discuss our response to this new development. A situated perspective begins to take shape: plan are made to deepen our investigative work on NobelSport in collaboration with all the locals we have met during the weekend, with an eye to blocking the factory in the event of a police intervention against the ZAD. Plans are made to coordinate these blockades across the region, the better to disrupt the forces of order. It has often been speculated that an expulsion attempt on the ZAD will have to mobilize so many cops that they will not have the means to protect other sites elsewhere in the region. From this perspective, NobelSport should be seen as a privileged target, along with the principal highway axes leading out to the west.

A team remains on the camp to finish stowing away the structures, while the bulk of the campers returns to the factory. This time we leave the anti-riot gates behind us.

A stroll through the woods and along the railway tracks of a viaduct bridge overlooking the Douffine, and we find ourselves on the other side of the river, behind the apparatus we scoffed at the day before. This experimental little countryside promenade allowed the three hundred or so of us to lay our eyes firsthand on the narrow cut-throughs and footpaths by which one can reach the main entrance of the factory unobstructed. At the entrance to the factory, as well as at the intersection just down the street from it, heavy contingents of police await us, ready to do battle. We circle-up in the middle of the field opposite the main gates for an impromptu meeting. The wisdom of a strategic retreat imposes itself on us, coupled with the affirmation that we will find ourselves there once again in other circumstances. The circle of the meeting then morphs into a line, and we rush the police as if on a medieval battlefield, with a howling cry. The dazed cops shoot off tear gas, yet after ten meters the advancing hoard abruptly stops, flips off and moons the police, and turns around and heads back laughing. As we reach the last police checkpoint at intersection nearest the main gates, the procession pauses for one last confrontation. Fireworks, rockets, another volley of stones and bricks, as blankets of tear gas fill the late afternoon sky. Finally, the long walk back to the dismantled camp.

The day could have ended there, but the declarations made by the police chief that morning encourage us to make our exit in slightly more flamboyant fashion. We arrive together, we leave together.

Our hundred or so vehicles form a line and exit the camp with rumbling engines. We wind our way through the village to the cheers of inhabitants: they understood that we will be back, and they seem amused by the idea. When the police do briefly attempt to block the procession further up ahead, passengers quickly begin pouring out of cars masked-up, and almost immediately, the path is reopened for us. The regional highway is only one kilometer away: if they block us, we will block it in turn.

Our long snake of headlights pauses one last time as it exits the village, just long enough to make sure everyone is there, and then the camp disappears into the distance. We arrive together, we leave together.

A poem written by Jean-Pierre Fraisse, Rémi’s father, on the anniversary of his son’s death:

The first day; interviews (French only) 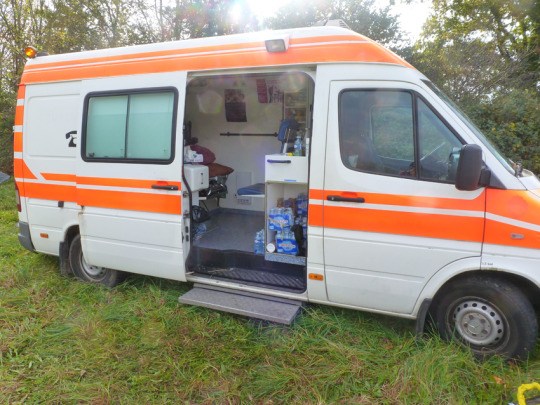 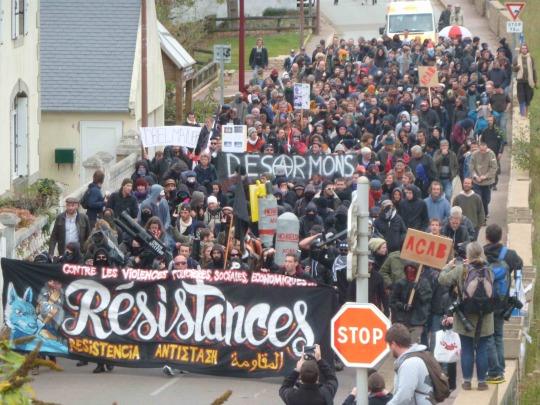 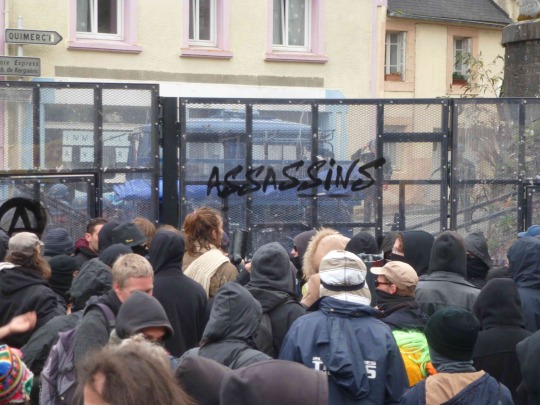 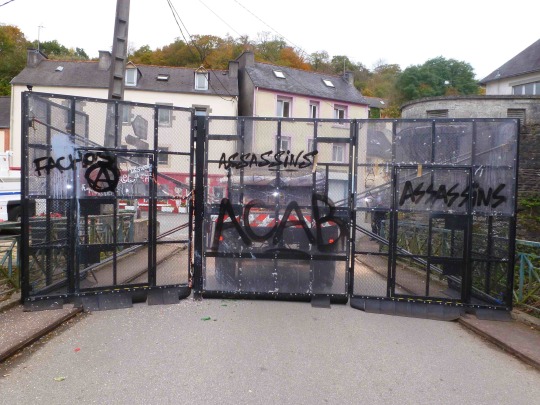 More info and photos at: http://desarmonslapolice.noblogs.org/ Translated by Ill Will