We are living in the political fever dreams of COVID-19. Fredric Jameson’s oft-cited quip – “it is easier to imagine the end of the world than it is to imagine the end of capitalism” – is obsolete.1  Having spread across the globe, the coronavirus has become the background phenomenon and concern of every passing moment. And along with it has come the imagination of an end of capitalism. However contagious and deadly COVID-19 is as a virus, its existence as the virtual object of the world’s attention and inattention has proven far more viral in its capacity to change society – mostly by cancelling our sensibility for realism. The dull weight of the everyday has lifted to unleash nightmares and dreamscapes that have magnetized the attention of our species with a measure of universality thought to be obsolete in our post-hegemonic world.

The continuous streams of news and commentary can hardly keep up with the latest collapse of everyday life. They give us the mise en scène in which to play the endangered protagonist of a canned Hollywood disaster flic and yet we’re told to stay home, keep calm, and practice good hygiene. Stories like the one about the recent missile strikes in Iraq are quickly phone-scrolled into oblivion by the latest notifications about the disease. And so we find ourselves reawakening with disbelief to the same new reality each day.

Following Michel Foucault’s Discipline & Punish, one might say that we live our reality as though caught between two fever dreams, which alternate depending on the nature of the immune response to the virtual presence of the virus. On the one hand, there is the suffocating nightmare of the global “plague city,” of governments securing human “life” by identifying all bodily movement and contact with disorder and death. The dream of governments today is to “return” us to a new normal in which they have won surpluses of legitimacy and control. The other dream is a dream of upheaval that won’t let go of all the vital signs of freedom amidst the pandemic. It wants to make irreversible all of the revived forms of class war, mutual aid, and social welfare, along with all of the autonomous means of survival not yet invented.

The general antagonism today is the war on COVID-19. And whether we like it or not, we have been enlisted to the immune systems of global humanity. Yet the politics of today concerns the decision before us. Will our collective immune response intensify our cynicism about our dependency on governments? Or will we experiment with novel forms of relief and this newfound disbelief in the black magic of the economy? Will we dare to play in the festival-dream of new forms of collective life and reliance upon one another?

The Nightmare of Governmental Realism

Today, quarantine lockdown extends from the “non-essential” flows of commuters to the fluids and gestures of our bodies, which have become paranoid colonial-style occupations of themselves. My body experiences itself as if on the other side of a gulf of unhygienic habits cracked open by the virtual omnipresence of COVID-19: I catch myself touching my face, I catalog the surfaces I’ve recently touched, and my proximity to others spontaneously triggers a quantitative calculation (“was it a distance of six feet or ten that was recommended?”). The new universal phenomenon is the object of a panicked consciousness immersed in a world that has been reduced to the medium for a disease vector.

As for the engineers of the new order, China and Israel represent the nightmare line toward the most grim extreme of plague politics. Both have employed the metadata of people’s smart-phones to track their movements and all points of social contact. Each new case is a profile whose recent social history is rounded up for quarantine. The horizon here would be something like Chris Marker’s film La jetée (or Terry Gilliam’s remake, 12 Monkeys): humanity survives, but at the cost of complete imprisonment and dependency upon a specialized medical government.

We glimpse this suffocating nightmare in the undecidable decision facing governments with respect to their incarcerated populations: do they relieve themselves of having to manage and care for their masses of concentrated and confined bodies? Or, do they give the prison guards and wardens a blank check to administer order by any means necessary? Whereas Iran temporarily released 54,000 prisoners on March 4th, two weeks later Massachusetts prisoners lost the right to be free of cruel and unusual punishment when a moratorium was announced on all disciplinary measures for prison staff. The undecidability here is no doubt due to the intensification of what Foucault called the carceral continuum, or the fact that the “inside” of the prison extends “outside” into the racialized ghettos of urban metropolises. The quarantine regime of social distancing and “shelter in place” lockdowns has turned the “outside” into a vast space of confinement, however gilded.

The Festival Dream of Relief

Against this new confinement, efforts at self-organization are cropping up all over in food distribution networks, rent strikes, requisitions of abandoned housing, and calls for debt jubilees. Such earnest efforts at organized care finds its parodic inversion in the devil-may-care attitudes of Spring Breakers migrating South, as well as paranoid social media speculation about riots breaking out amidst mass hoarding. All of it tracks with what Foucault called the “whole literary ﬁction of the festival [that] grew up around the plague.”2

Things we struggled for only weeks ago have been given outright – and much more besides. In the U.S., conservative food stamp policies have been lifted, unemployment safety nets reinforced, moratoriums on various costs of living instituted, and political parties are fighting not over whether to give UBI, but how much. Those immunized in their home-bubbles are offered an increasing amount of freely circulating intellectual property, while, in Chicago, parking has been made free, evictions courts are on hold, and utility companies are giving away electricity.

The black magic of the economy has revealed itself in its very withdrawal from our lives, tempering our panic and fear with a small modicum of relief. As Dan Kois recently argued, this relief has shown just how much of American society and its ‘death on the installment plan’ is a sham.3 The mask has come off and the wand behind the conjurations now appears in the simple arbitrariness of its operations. Why don’t all of the other ways we get sick, fear hunger, or struggle to stay afloat count as reasons for having free access to high-quality food, health-care, and shelter? If all it took was a wand waving to put a stop to bills, evictions, and the like, does this not make all of our sufferings and hardships under normal circumstances seem meaningless?

Just as we let out our sighs, however, the nightmare visions from abroad come closer and remind us that the only continuity between what was once normal and the current state of exception is the power of governments based on our dependency. We feel this dependency whether we panic or not, whether we trust their assurances and injunctions not to hoard or whether the sight of emptied shelves floods our heads with visions of the broken supply chains and interrupted logistics that we rely on to eat. As Chuang rightly noted, the arrival of COVID-19 in Wuhan induced a paradoxical form of general strike: there is a profound work stoppage, but it is hollowed out and devoid of any subject of history. The subject of history: not even the coronavirus can assume this mantle. Our continued dependency makes the strike false.

Yet one cannot help but read the ‘New Deal’ on offer as a symptom of faltering government legitimacy and the fits of market confidence. In the U.S., the government is betting that an avalanche of compromises with Democrats will cover over the truther-response of the Trump administration and the stock sell-offs of Senate Republicans. As belief in the forces of order goes into convulsions, one thinks, ‘If they cannot guarantee our survival, all bets are off.’ As we take all these “gifts” coming down from on high, we ought to remember that the social welfare state of the 1930s New Deal was a warfare state. And what will become of our newfound alleviation without the invisible enemy that has, with its own magic, cancelled society?

On the brighter side of things, it’s worth observing that we have been given a hint to the riddle handed down from the failures of 20th century revolutionaries. For one fundamental limit of all struggles since the 1960s has been their scale. It has been a very long time since we’ve been able to think what might connect struggles happening all across the world. Despite being geographically dislocated from one another, the revolts of 2019 showed promise simply in their synchronic co-existence and their ability to repeat each others’ tactics under the maxim “Be water.” Yet not only were the problems at the heart of these struggles locally particular (despite their many commonalities), they were never able to flow together in a global strategy.

Against such a backdrop, COVID-19 portends a new universal frame of war. For however uneven the experience of vulnerability may be, the global spread of the coronavirus amounts to the generalization of the new antagonism. When was the last time we were able to share our experience of dependency on the world of governments as a crisis? The multi-generational time-scale of the climate catastrophe has so far prevented it from mobilizing all of the humanity that it dooms. Yet whether it is glowing from our screens or hanging in the ambient disquiet while we distract ourselves in quarantine, the new reality for everyone is that reality has fallen apart.

In these fever dreams where trust in the authorities is in shorter supply than food and the means of punishment alternate between melting into air and locking down hard, it is perhaps possible to take the wand from the magician and begin conjuring a reality of our own. What is frightening about COVID-19 is how little we know about it. But just as uncertain is how governments will react to us amidst this legitimacy crisis and how peoples will respond when the repression of governments comes down too hard.

How can we flee our dependency on the old world while “sheltering in place”? If the world is cancelled, what are all these bills, digital parking meters, and universities but the fossils and tombs of a dead world? What new uses can we still invent for what stands idle and unused around us – what role can they play in the new dream? How can we breathe new life into existing spaces of immunity, like vehicles and homes? And what new immunity spaces remain to be invented? What new forms of action at a distance are called for? We are already venturing tentative answers to these questions. We try to flow like water where we still can. However, against a virus that fills our lungs with fluid and against governments seeking to return us to the earth of realism, perhaps we should consider the element of breath, levity, relief, and jubilation: air. 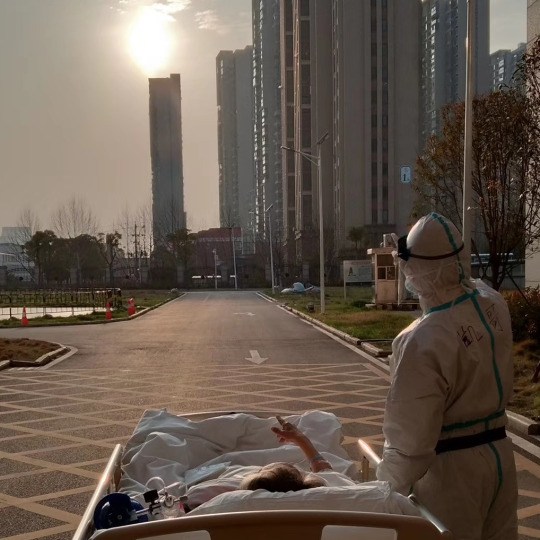