[B]eneath the surface of that idea – that truism, black lives matter – is an unsettling challenge. What would it mean to create a world, or at least a space, where that actually was true?

A Cop-Free Zone in Carbondale

On Friday night a couple dozen folks converged on the local autonomous infoshop in Carbondale, IL for an illegal dance party in the street. In addition to locals, cars arrived from Bloomington, Chicago, and St. Louis to participate. The plan was to throw an unpermitted street party with free food and loud music, and as things progressed and energy rose, to block off the street and visibly polarize the space against state violence with large handmade banners declaring it a cop-free zone.

The event proceeded more or less as planned: a collective cook-out transitioned into a dance party, furniture was dragged into the streets and fireworks were set off, until banners painted earlier in the evening were finally strung up across the two lanes of the street and the block was taken over. Several police SUV’s circled at a distance but avoided any direct contact for almost the entire evening. By the time they finally approached the block on foot, the party was already being slowly wrapped up and a large contingent of friends and locals had just bounced to go lake swimming. A decision was made not to enforce the blockade, yet after the street was cleared for two minutes and the police left, it was promptly re-blocked with furniture as loud jams continued to sound out into the night for another hour until the last people left.

While this first experiment was modest in its scale and intensity, we think that experimenting with police-free zones has a strong potential for resonance in the current North American context. It is less Carbondale’s specific event and rather the broader proposal that we wish to focus on below.

While recent weeks have seen thousands of people blockading traffic and freeways across the USA, the tactical impulses and the actions attempted in this cycle of anti-police struggle have largely rehashed what we saw in the summer and fall of 2014, without inventing or experimenting with anything all that new.

When we think strategically about tactical issues, it is important to recall that the relationship between sense and gesture is a dynamic and fluid one, one which camps on a shifting soil of forces and events. Sometimes thought falls short of the tactics and gestures that we’re engaging in, and we find ourselves demanding things we already possess, or framing things through terms or oppositions that the movement has already surpassed at a practical level. Other times, thought runs ahead of our tactical repertoire, such that every effort to elaborate a practice that feels appropriate to the affective declension of hostilities and the ideas that folks are thinking about seems to fall short.

Our sense is that our present situation resembles the latter scenario, where thought runs ahead of the gestures we’re seeing. The current cycle exhibits both a rupture in thought (since the 2014 cycle of struggle) as well as an exhaustion at the level of practical methods.

We have the impression that the current tactical menu (freeway blockades and generally-pacified protest marches) actually fall short of what makes sense to people right now. Both on social media, in everyday encounters we’ve had, as well as in recent demonstrations among some of the newer Black activist cadres, folks right now seem to be much more interested in talking about the abolition of police than its reform or ‘community control’. We see this as a significant ‘ideological’ development (to speak loosely) that is encouraging, but which has so far failed to have any material consequences at the level of new practices. If we don’t want ‘better policing’ but rather to have police out of our lives, what sorts of experiments can respond to this collective need? What does it mean to give this theoretical and affective destitution of the police a practical face, one that corresponds to our currently low levels of material organization? This is the question that the current cycle of struggle is attempting to ask, and it’s one that calls for a practical answer.

At the same time, a cruel but apparently inexorable logic seems to ensure that virtually irrespective of its initial ‘radicality’, the more a certain tactic gets repeated, the more its impact tends to become purely symbolic.

The Washington Post reports that in some parts of this country over half of the demos in the past two years have blocked freeways. While it once pushed the limits of the thinkable and broke open a new terrain of struggle, the freeway blockade has become a knee-jerk impulse which, for all its historical rationale (highways were often instruments to deepen segregation), is beginning to feel like a flat routine. In Chicago, things reached the point that when the first Alton Sterling demo took place a week and a half ago, the police all-but-invited us to take over the I-94, knowing that at most we’d be out there a few minutes before leaving and going home. Our impression is that the situation isn’t altogether different elsewhere.

The more our methods become calcified and predictable, the more easily they are governed, assimilated, and neutralized. But even more importantly, the more our gestures fail to become worthy of the thought-event of the police’s destitution (i.e. their having been momentarily stripped of any veneer of legitimacy, through the exhibition of the raw violence that it served to conceal). For legitimacy can be stripped without the force of the police being truly deposed. For the latter to happen, we must manage to articulate concrete forms of living in which they exert no force, nor shape the economy of meaning around us. For this to happen, we must do more than abandon any residual reliance upon and faith in the police. We must create open-ended experiments in relating to one another where they aren’t. 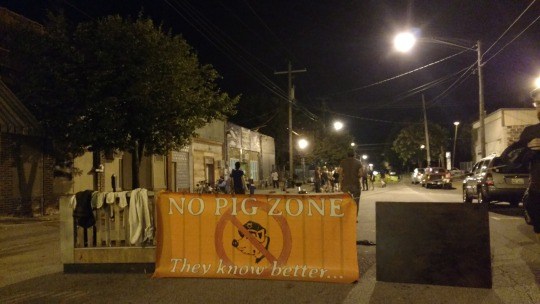 As anyone who has ever spent any time at the massive autonomous territory at Notre-dame-des-landes in Western France (known as the ZAD or the Zone-to-defend) can tell you, the fact that police don’t enter the ZAD shapes the experience of being within it in an essential way. The problem cuts two ways, of course, since the mutilated structures of behavior and association we have internalized as governed subjects do not spontaneously disappear when the police withdraw. Even small experiments such as the one in Carbondale the other night reminded us at certain moments that hostilities within our communities will continue to surface in contexts of reduced state presence. Yet there is no mistaking the feeling one has when navigating a car or bike through the circuitous barricade architecture that marks the outer edges of the ZAD, and feeling the weight of the air change as you pass inside, just knowing that at least for a while, at least here, we needn’t worry about police checkpoints, stop-and-frisks, and all their attendant forms of everyday terror. The feeling is palpable: it feels like an opening of the possible.

In a different context, whose fate is no less uncertain as we write this, dozens of barricades remain in force across the state of Oaxaca, Mexico, as teachers and comrades of all ages push into their second month of frontal insurrection against the State. If the horizon of ‘abolitionism’ in our context remains a question mark at present—if its utility has not been sapped by liberals like Angela Davis and co.—then let it point to the struggle in Oaxaca, which is living abolitionism. For the barricades that dot the map of the region have the potential to rid their territory not only of the pestilence of police and politicians, they carry within them the potential to abolish the economy as well.

To defeat and then depose the police, to abolish the economy—this would the horizon of a superior abolitionism, or better yet, what a friend has elsewhere preferred to call “demolitionist desire”.

But we’re not there yet. We’re nowhere near the level of organized struggle seen in Oaxaca. To propose passing from the highway shutdowns going on now to the highway barricades seen down south would require a quantum leap in our organization that is difficult at present to imagine, if it were even desirable (the highway might, after all, be the least habitable space in the metropolitan fabric).

For now, we propose a diffuse experiment with cop-free-zones in spaces we stand a better chance of holding down and inhabiting, such as blocks in our neighborhoods. The latter presents the incomparable advantage that it can actually conceivably hold and materially be filled with collective life. But for this, a different series of questions must be placed at the forefront of anti-police struggle:

On the one hand, logistical questions—what resources would we need to hold out? who can cook for two dozen, for a hundred? who knows how to effectively circulate info throughout the immediate and remote parts of town? how can we safeguard our need for anonymity, resist the trap of the media spectacle, and still evade the wingnut caricatures thrust upon us by the state? if one such zone were able to be held for a longer duration, how could it propagate itself?

So-called ‘technical’ questions like these cannot be detached from social ones: how will we negotiate the ethical differences between us once the cops ceased to play a role? if we had to defend the zone against police, who on our blocks would we find ourselves standing alongside? The degree of trust and shared vision existing between folks who find themselves positioned differently by police violence will play an important role here. If those most targeted by police lynching have the impression that the white folks aren’t serious about defending the space, if our contingency plans aren’t adjusted appropriately to the degree of organization and the density of bonds between the different crews of folks going into it, then runs the risk of feeling more like a Custeristic provocation of the cops than an experiment in defending a space expressive of a real desire for collective life.

Still, our separation will not be overcome prior to engaging in such experiments. And yet, to tear a block or a whole neighborhood away from the forces of order and begin experimenting with collective forms of life, we actually needn’t share the same experiences of those forces we seek here to exclude (police, prisons, etc.). As was pointed out elsewhere,

“A police-free zone is not a ‘new world’, it is merely the collision of many. Many worlds smaller than that of police order and governance individually, but that perhaps together are capable of defending themselves. Of surviving a collision.”

We need to get away from the exhausted debate around ‘riots versus peaceful marches’, ‘violence and non-violence’, ‘safety versus risk’, etc. Our time is much better spent getting organized in the places where we already live in ways that can make pushing for experimental police-free zones a plausible potentiality. And anyway, from the moment we take hold of such a zone, questions that right now are too-often answered by reference to sterile ideological oppositions, or else by sorting people according to their ‘structural identities’, tend to be reshaped and concretized around the substantial situation in which we face the world together, here and now.

A police-free zone is not a model or a program, it brings no pre-formed utopia into being. It is an opening of the possible that clears a space of encounter, of intense inhabitation, an undercommons ripped from the hands of the pacified metropolis, for as long as it can be held down. If the abolition of police is to become more than a slogan, its preparation must begin with small realities.