Since the events of April 9th and the wild week that followed, the Nuit Debout assembly placed the question of violence at the center of the debate. While citizens persist in their rigorous pacifism, stances in favor of the “diversity of tactics” are also multiplying. The National Student Coordination itself has explicitly refused to dissociate rioters and demonstrators.

Amidst this proliferation of discussions, the Nuit à Bout Action Committee has gathered a few positions that seem pertinent reinforcement of the movement as well as its repression. The more seriously we our presence in the Place de la République becomes, the more frequently situations leading to confrontations will present themselves. We must prepare for them. It isn’t a question of convincing everyone that violence is a viable option, or a necessary route. It’s simply a matter of finding those forms of action, perhaps frightening, that will deliver us from fear. 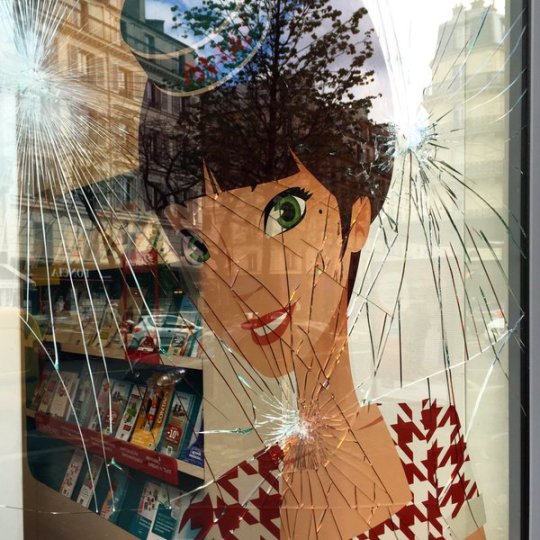 What must be explained is not why things sometimes get out of hand around the Nuit Debout gatherings in Paris, but why it doesn’t happen more often. In the end, it’s clearly understood why people who have been gathering every night for two weeks to envision the end of capitalism end up wrecking the windows of the Société Générale bank (#PanamaPapers). This is obviously correct, it makes total sense. The problem lies elsewhere. Which is why neither the moral apologias for violence nor the theoretical or ideological justifications for smashing things will succeed in bringing more people to fight against the police or break bank windows.

We shouldn’t forget that if many people are staying quiet in demos, it’s not because pacifism is in their blood, but simply because they’re afraid. To overcome this fear is a collective task, one that is nowhere better accomplished than in the streets. This begins with taking care of everyone, and not only one’s friends—with us all taking care of each other, even in the worst situations.

“Diversity of tactics” is an expression which, like its cousin, “convergence of struggles”, tells us nothing about what must be done when people are brought together who don’t have the same way of struggling, or don’t have any way of struggling at all. The expression conceals what is actually a pretty liberal idea: everyone struggling next to each other, in their own way, without bothering or talking to one another. Diversity of tactics is nothing but a subtler form of dissociation. When will we get a “diversity of corteges”?1 In fact, the FIDL [Fédération indépendante et démocratique lycéenne] already asks for it at every high school demo.

The question is not whether to be violent or not, but of being offensive or inoffensive. Three gangs of five friends determined to smash ATM’s but incapable of organizing on a larger scale than their own affinity group are just as inoffensive as 10,000 unionized citizens slowly marching behind the CGT’s sound-system-french-fries-van. Conversely, 3,000 people holding their ground in a cloud of tear-gas while a small group throws rocks from behind a banner almost succeeded in having a nightcap at Manuel Valls’ house.

All the most powerful moments experienced in the streets since March 9th have demanded, at one point or another, that those who were ready to fight and those who were not took care of each other, decided to stand together, and not just side-by-side in polite and diplomatic indifference. On April 9th at Place de la Nation, there weren’t enough tear gas grenades in all the capital to tear apart the hundred or so people who were bombarding the CRS lines from the hundreds of people who booed and filmed the cops, while cheering or nursing the rioters [émeutiers].

Little by little, the “question of violence” appears for what it is: a diversion. As long as we continue to talk about this, and moreover to speak about it in moral and ideological terms, we won’t confront the true strategical problems posed by the demonstrations. To write one more apologia for violence will accomplish nothing. There are plenty of people ready to defend themselves from the police. What’s missing is precisely the cortège to defend.

A demonstration is not a symbolic ritual. It is a test of strength, wherein those who have reasons to revolt physically encounter those paid to maintain the world in the deplorable state we find ourselves in. Every demo is the actualization of a rapport de force between those who are ready to take risks to change the situation, and those whom we pay to preserve it. The problem of official union demonstrations is that they deny the very existence of such a force relation. The image of life and of struggle they offer us is disgusting. Sponsored balloons, sausage-slogans and security squads; if “struggling” means to march like the unions, then to struggle means to remain passive, to repeat the same gestures again and again, to never take risks. In addition to being misleading, it is intolerable. We only begin to fight when we cease to be inoffensive: this may sound tautological, but the entirely of the union forces spend their time affirming the contrary. Their gestures in the streets express nothing but submission. 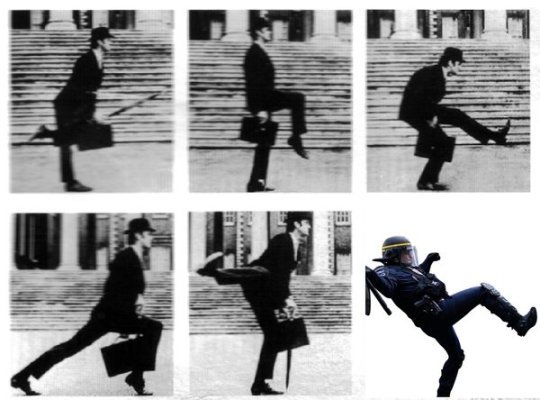 The police maintain order.2 Because it is a protest against the order of things, a demonstration is, in its essence, a confrontation with police, no matter what form it takes. Therefore, when night comes, there is a winner and a loser. Either the police win (April 5th), or the demo wins (March 31st). The police win when everything goes as planned by the prefecture. Demonstrators win when everything doesn’t go as planned by the prefecture. What freedom we win consists in what we manage to collectively pull off under the noses of the police. Winning matters. As much for the construction of the rapport de force as for our ties to each other, for our courage. Too many people come to rallies like tourists, unconscious of the importance of successfully breaking the mold. They might be sympathetic clowns dancing in front of the CRS, or rioters who are indifferent to the behavior of the rest of the march. It matters little: both are inoffensive.

To ensure that everything happens as expected, the cops set up their apparatuses: kettles, closed streets, hordes of plainclothes officers, and so on. In the demonstration, our challenge is to combat the police apparatus: we must prevent it from working, we must break it down. Not only are there thousands of different apparatuses, but there are thousands of different ways to break them down [déborder] 3.

Likewise, there isn’t much to say about a demo where the police apparatus hasn’t been challenged. Which is perhaps why, when the media talks about demonstrations, they speak exclusively of the moments that break away [les débordements], for these alone mean anything. To say that “the confrontations occurred on the fringes of the demo,” makes about as much sense as saying “the goals were scored on the sidelines of the football field”.

Smashing things [La casse] is the easiest and most obvious way to break a police apparatus. It is also one of the least interesting, and most boring. What most narratives about rioters miss is that the latter would usually prefer to do something else: to free the demo by breaking the police lines, to occupy a building, to start a breakaway march, to hold down barricades, paint inspired tags, etc. Smashing is often a last ditch, stopgap option. It is the degree-zero of the demonstration. As for the classical union rally, family-friendly and good-natured, it isn’t even a demonstration: it is a police operation.

It’s worth noting that there’s rarely been as few windows broken in a social movement as that of the month that just passed. When you’re confronting the police, you aren’t worrying about smashing shit. You’ve got better things to do.

If the Nuit Debout’s assembly can be in turns entertaining, touching or ridiculous, it is a useless tool for organizing ourselves in a revolutionary perspective. It’s a practical problem: you just can’t discuss such matters in the same way one takes a ticket and gets in line at the butcher shop. The infinite succession of stopwatched, disconnected speeches all but abolishes the conditions of a constructed conversation. Nobody can say anything intelligent in two minutes. Everybody sees it, but everybody goes along with it. Whatever the “democratic” will of certain organizers or “facilitators”, the decision and voting procedures are generally nothing but a farce. What they parody from “formal democracy” is the powerlessness related to the fact that the decisions, in the end, touche nothing and reache no one [n’engage rien ni personne]. And yet, to sustain the confrontation does require that we make certain decisions – decisions which the general assembly makes de facto impossible. We attend them in the same way we consume The Voice. To elaborate a revolutionary perspective requires that other modes of speaking, sharing and of collective intelligence be deployed in a parallel fashion on site.

Our marches will begin to add up to something when everyone shares not a principled tolerance towards the actions of others, but a common strategic perception of the situation. That is to say, once we perceive all demonstrations as battles we must win by any means necessary; once we are all inclined, not to violence, but to speed, surprise, and being offensive. It is by our attentiveness to the movements and affects that agitate our demonstrations that we will succeed in finding a common ground allowing a true convergence of struggles—at one central point, Place de la République.

There are thousands of non-violent gestures that then come to mind that would help to increase our efficiency in the streets:

March en masse on sidewalks in order to prevent the lateral movements of the CRS from catching the demo in its claws.

Think carefully about the routes of wild demos. Those leading the march, in the heat of the action and improvisation, don’t always choose the best routes. Help them.

Get in the habit of hiding our faces at the right moment: as much to sabotage the identification and surveillance work systematically and massively conducted by the police as to render demonstrators taking part in confrontation indistinguishable from the others.

Confrontations tend not to unfold in silence or on mute. Slogans and chanting express the spirit of the movement. Thus, they have their place in all moments of confrontation. When others are fighting, sing and dance.

Be mobile and do not allow any holes to form in the march when security squads or police attempt to divide it.

Learn to protect ourselves from tear gas so that it’s not just those who came equipped standing in the clouds.

Systematically send back tear gas canisters, or at least keep them away from the cortege.

Stay calm during police charges to avoid brawls. Hold together and don’t back off a hundred times farther than where the police line stops, handing them more free space.

Their morals are not ours. 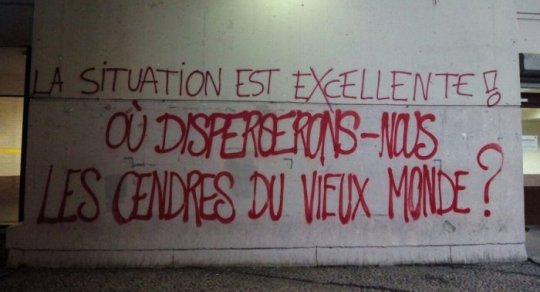 Translated by Ill Will Editions, based off a draft posted anonymously to Anarchistnews.org

1. A cortège is a procession, but here signals something more like a bloc within a march. —Trans.↰

2. In French, the job of the police is typically described as “le maintien de l’ordre public”, which translates literally as ‘the maintenance of public order’. —Trans.↰

3. This term appears frequently in these writings (cf. the article “Build the Hacienda”). Here it can also mean break away, outflank, overflow, jam, or to flee beyond. —Trans.↰