The following two texts were sent to us by Chilean friends associated with the Vitrina Dystópica collective. They were written in the immediate wake of the riots on October 18, 2019, which left seven dead and led to the declaration of a state of emergency.

When the masks are removed and they are revealed as what they have always been: homicidal dogs, and not in reference to the animal, but to the insult, because the only thing animal-like about them is that they die, too, despite the cops and all their horrendous guardians, they die, and therefore they are afraid. Despite all the drones and all the public resources being used exclusively for the armed forces that are their private guards, they are afraid. No matter how much the infamous soldier in charge of ordering this new massacre in the name of the “stability and order” of this vile business that they call a country tries to hide the numbers of wounded and dead that they are beginning to leave throughout the country, just as they did in 1973. Again and again, they are afraid. A disgusting cowardice that makes them take refuge in their laws, which they themselves constantly break or change to benefit themselves more and more at the expense of all of us. But then, right then, just as was to be expected: we will not consent to this.

And it is now, friend, neighbor, it is now that the entire dignified city, the dignified rage, cultivated for centuries, emerges, flourishes. And it is the youth, the kids that carry it, even when they receive gunfire from the hired assassins of the State which, at this point, is just another name for the Consortium of all their mafias. It is the kids, the young ones, them, the same ones that those who are sickeningly comfortable have long been insulting, pointing out as useless (“neither-nors” was the name given to them by the last social scientist, copying a fad that he didn’t even bother to understand); those same ones are those who are teaching us that dignity, justice, courage and the desire to live is not learned except in the gut and that, therefore, nothing has ever been said by those who wish to see, in those that are emerging now, what that they themselves were, because, luckily for all of us, they are exactly what has never been.

Now that the collapse threatens even the desire to live, the desire to get up, because the capitalism going on outside wants to present itself as irreplaceable, unbreakable, even beyond the frontiers of what is habitable. Now is when it has exploded in their faces. And they won’t hesitate to strike, kidnap, murder or hunt, because that is what they know how to do. And now is when every action is important, every breath, every step, every hand found along the road, every hug, signal, whistle, shout, guidance.

No hunter has ever been able to handle what is untamed, because it resists every cage, every attempt at confinement, because it slips away, finds its channels, is summoned, appears and disappears, strikes back, insists, like pain, because it is pain. And pain is our history.

And it is this history, the one that appears in the fire today, the one that screams, the one that jumps turnstiles, the one that destroys the enemy city, the caged city, the city of the colonial names. The history of those who are afraid, those who wanted to present themselves as pharaohs. But no. We will not consent. Not one of us, not in Santiago, not in Chile, nor anywhere else, is willing to accept that the delusion of their wealth must be paid with our lives. Because no, if history has been our pain and the future is the catastrophe, then this “after” which has just begun is the indomitable cry of those who, by losing everything, even our future, have simply been capable of inventing everything all over.

And no, nobody is naïve here, every insurrection is always more beautiful than imaginable, but also more unpredictable, more unstable. And no, nobody is naïve here, nothing ends today or tomorrow, and we are lucky for that! Because we have opened up an “after” towards the future with which they intend to capture us, that is, to make us captives, and it has been opened up by those who have most received the contempt of civilization, children, girls, boys, from whom they tried to take away the right to imagine any future, well, they have invoked the political imagination of all the centuries of oppression to show us that the only way to fight against it is with self-confidence, with boldness, with courage, with the body, that is the best soul that anyone has been able to imagine.

And it is the body that carries this sensibility. An irrepressible sensibility that now smells, feels, tastes, breathes fire, smoke, terror, courage and boldness. And it is also there, in the midst of this city which is burning, that it finally finds a moment to halt its eternal, sinister rhythm, its uncontrolled rhythm; it is there where they are spinning, embroidering and weaving alliances that encourage us to visualize an “after.” Alliances which, since they are very recent, are perhaps unforeseen. Between students and pobladores, between professionals and retirees, between merchants and workers. Between all of us, between anyone.

And now that they understand the power of this mixture, that is, of what is untamed, of what is stained, of what is abject, of what is abhorrent, they will come with all the traps of their law, which is death. And now, right now, is when it is impossible to speak in the third person, is when what is impersonal, this common interior that is overflowing, starts getting bored of this, begins to feel sick and tired of this, gets fed up, and begins to come together. It is now that it wants to become an uncontainable presence: masses. In other words, power, act, action. Where nobody went, it means we all are; where they touch one, we all stand up and stop them, because if it made sense to say the society of fatigue, it was to reactivate its members, to find ourselves in this weariness and to transform it into fury, dignified and beautiful, violent as it cannot help but be.

And we know this is just the beginning, and we love it. 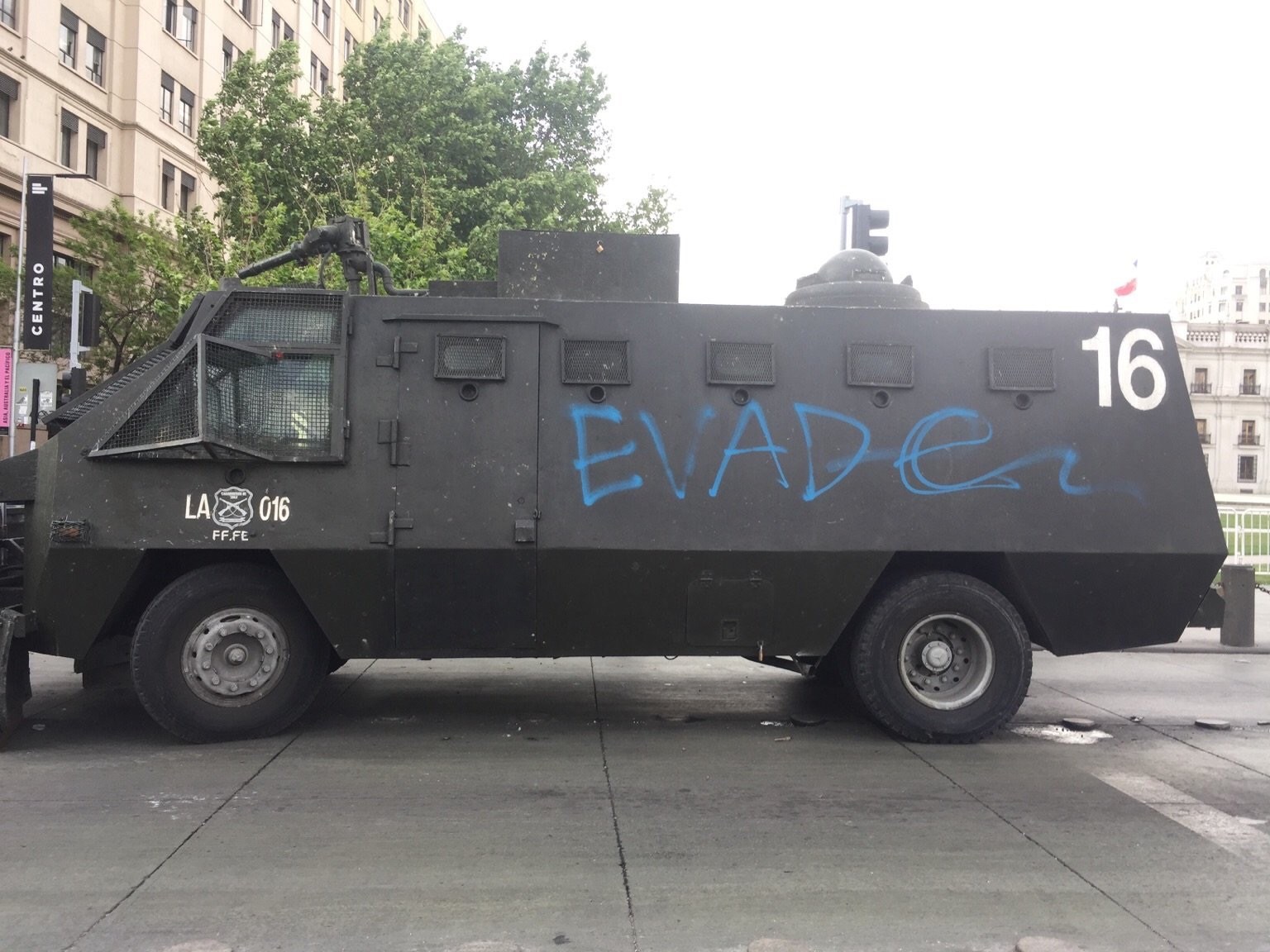 Clinamen. Even the smallest occurrences, of the sort we might otherwise assign to chance, depend for their existence upon an entire situation. Beautiful like the fortuitous encounter between two worlds—the police and the crowd—the riots in Santiago managed in just a few hours to crystallize the entire wager and disposition of our epoch. On the side of the streets: the ever-increasing importance of circulation, which makes of every minuscule fare bump a matter of survival. On the side of power: the same sordid infrastructure that everywhere forms the inevitable underside of cybernetic capitalism. So long as the new and darker laws have not yet been passed, the option of reverting to old reflexes remains a perpetual possibility—the state of emergency, and an army that unchanged since the time of Pinochet… And finally, on our side: the muffled temporality of strategic inclinations, the irrepressible pulsing of a desire for lasting and deep insurrection, the conscious efforts of a handful of minds, a handful of bodies with which to accompany the arrival of the movement on which our future depends. Finally, there is the courage of a few thousand high school students, who alone knew how to call an entire capital into rebellion.

Wilderness. “This history, which is pain, is bursting into flames today, screaming, busting through the porticoes, destroying the enemy cities, the imprisoned cities, the cities with such respectable old colonial names. The city of the fearful, the city of those who played the pharaohs. But no, we will not submit. No one, neither in Santiago, nor in Chile, nor anywhere else, can accept to pay with his life for the madness of their wealth.”

Us. Never did we expect to live in a world where we might seriously find ourselves writing one of those good old-fashioned, solemn sentences that we assumed to have been forever buried in the dustbin of historical curiosities, along with those Marx-like calls, “workers (of all genders) from all countries, unite!” And yet, riot after riot, city after city, country after country, week after week, a powerful sense of living through a single, common uprising inhabits us. The crisis of governmentality is general: metropolises of the world, gather together.

Collapse. When those who didn’t bat an eye over 3000 dead and missing, or 40000 tortured, suddenly mobilize the army after an mild onset of rioting; when the very same week, we discover that China has banned the sale of black clothing within its territory—it must be admitted that this Empire is trembling. All things considered, the collapse of capitalism is perhaps closer than the end of the world to which they all seem so committed.

Epoch. Not since 1968, and the crushing of its legacy under the neoliberal riposte, has the field felt so open as it does today. The Yellow Vests, Hong Kong, Ecuador, Haiti, Egypt, Lebanon, Catalonia, Honduras, and now Chile—it is the opening of a new sequence. Reformist as the claims may be, we are clearly at a crossroads. A still-anonymous class, confusedly conscious, has begun to understand that our destinies are linked. The current ecological disaster will be the theater of a decision between the night of surveillance, and the glimmers of a return to the world.

Friends, one more effort to be fully revolutionary. We call for uncivil disobedience in metropolises around the world.