The following article was sent to us by friends in New York City. Taking a wide lens, the text invites us to clarify the historical and political specificity of the ongoing anti-police revolt.

The working class in every country lives its own life, makes its own experiences, seeking always to create forms and realize values which originate directly from its organic opposition to official society. —CLR James, Grace Lee Boggs, and Cornelius Castoriadis, “Facing Reality”

2. This uprising was not caused by outside agitators. Initial arrest data shows that most people were from the immediate areas of the rebellions. If there were people driving in from the ‘suburbs,’ this only reveals the sprawling geography of the American metropolis.

3. While many activists and organizers participated, the reality is that this rebellion was not organized by the small revolutionary left, neither by the so-called progressive NGOs. The rebellion was informal and organic, originating directly from working class black people’s frustration with bourgeois society, particularly the police.

4. Not only was the police-state caught off-guard by the scope and intensity of the rebellion, but civil society also hesitated and wavered in the face of this popular revolt, which quickly spread to every corner of the country and left the police afraid and in disarray. 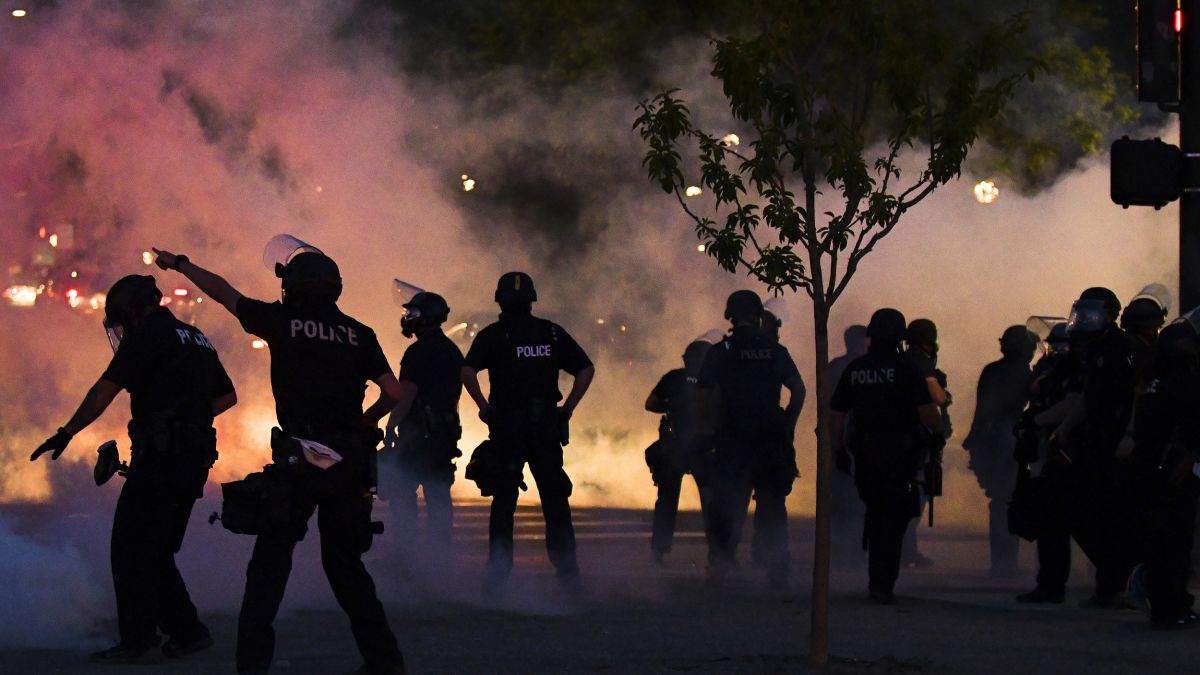 5. The police displayed many weaknesses during the rebellion. Up against a few hundred protesters, departments were easily overwhelmed and forced to concentrate their forces in particular hot-spots. Once police arrived in one area of conflict, people would retreat and move on to another location to do more damage. Conventional warfare, with its emphasis on superior weaponry and technology, failed to counter a series of flexible, decentralized, rapid maneuvers focused on property destruction.

6. The militant phase of the rebellion was from May 26th to June 1st. After June 1st the rebellion was not only repressed through military force, but also politically repressed. Aside from the police, military, and vigilante crackdown, the uprising was politically repressed by elements of the left, which reacted to the riots by blaming them on outside agitators. In some places, “good protesters” went so far as to detain “bad protesters” and hand them over to the police.

7. Black NGOs, including the Black Lives Matter Foundation, had no relationship to the militant phase of the rebellion. In fact, such organizations tended to play a reactionary role, often preventing riots, looting, and attacks on the police from spreading. Black NGOS were the spearhead of the forces dividing the movement into good and bad protestors. The social base of Black NGOs is not the Black proletariat, but the Black middle class and most importantly a segment of the radicalizing white middle class.

8. This rebellion was about racist police violence and racial inequality, but it was also about class inequality, capitalism, COVID-19, Trump, and more.

9. This rebellion opens up a new phase in the history of Turtle Island. A new generation of people have experienced a powerful movement, and in the face of ongoing inequalities and crises people are unlikely to sit back and accept them. The rebellion has produced a new political subjectivity—the George Floyd rebel—initiating a set of processes with many possible outcomes which will be determined by class struggles in the present. The American proletariat has finally emerged and entered history. 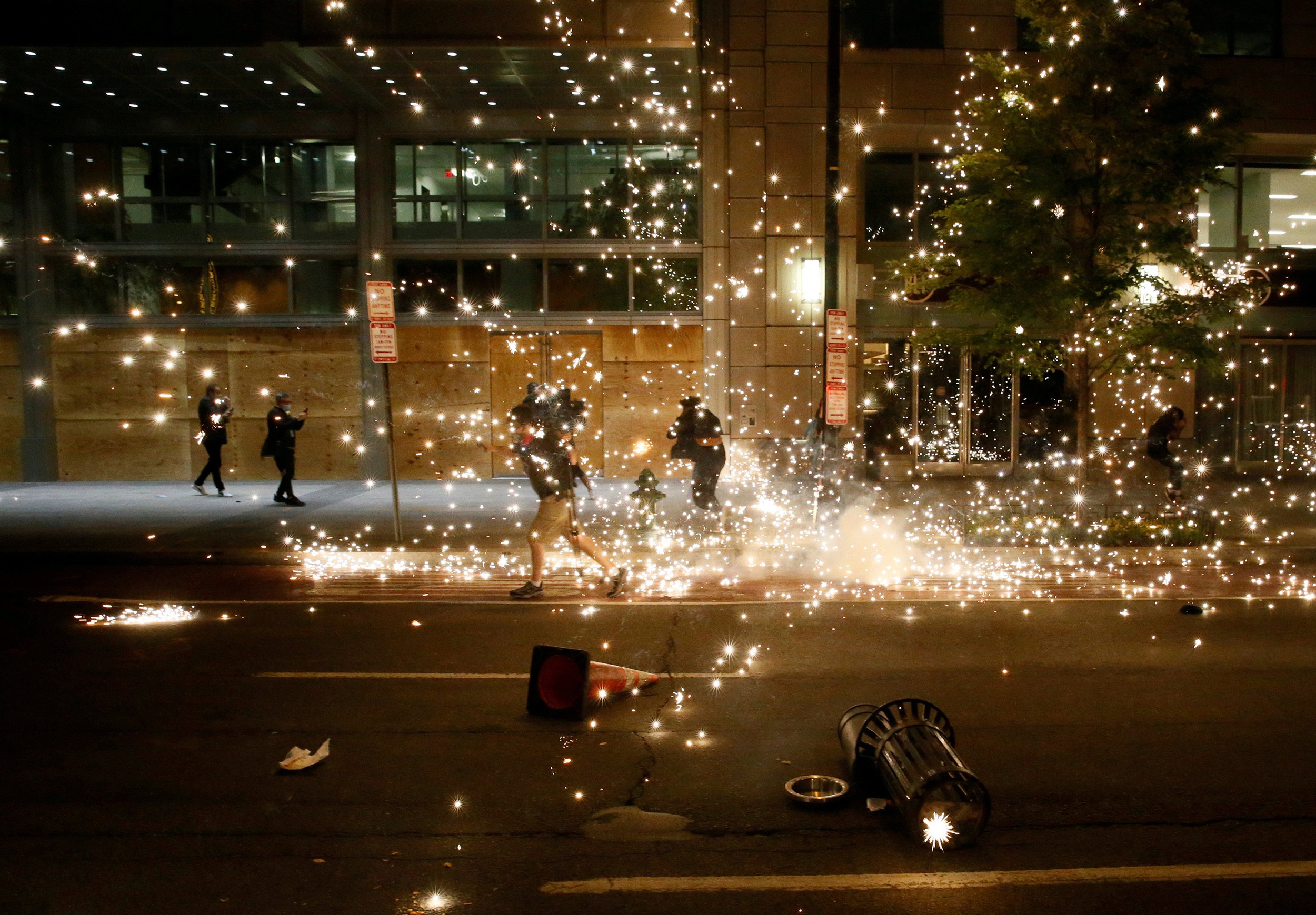 10. This rebellion is the tip of the spear in the struggle against the pandemic. The rebellion shows the world that revolutionary struggle can happen even during a pandemic. The pandemic is only going to worsen the living conditions of people around the world, and as a result, we can expect more rebellions across the planet.

11. The George Floyd rebellion has been put down for the time being. Many NGOs and middle class people will make a buck off the brave efforts of the rebels who fought during that week. But these rebellions will return. They are part of the ongoing class struggles that have been happening in the United States and at a global level since the last global recession (2008-2013). Now the world economy is once again in recession.

12. The ongoing daytime protests are a contradictory product of the rebellion, drawing in large crowds, more middle class and more white. This composition certainly helps to create a non-violent and “good protestor” type atmosphere, but that is inseparable from the Black leaders who advocate this type of politics. At the same time, the expansion of the day time protests allows for greater participation, which is important.

13. The night time riots had a limit in the sense that they did not draw larger sections of society into their activity. Riots, looting, and attacking the police are a young peoples and poor peoples’ activity. Many working people had sympathy with it, but stayed at home. This shows that riots by themselves are not enough.

14. Many important struggles have merged with this movement, including transit workers refusing to collaborate with the police. Still, it is unclear how this rebellion connects to the simmering workplace struggles, prison struggles, and housing struggles which are unfolding in the context of the pandemic. It seems there are historical and future connections to be made. To what extent were those involved in the prior workplace struggles involved in the riots? To what extent will the rioters go back to work and continue the struggle at work? 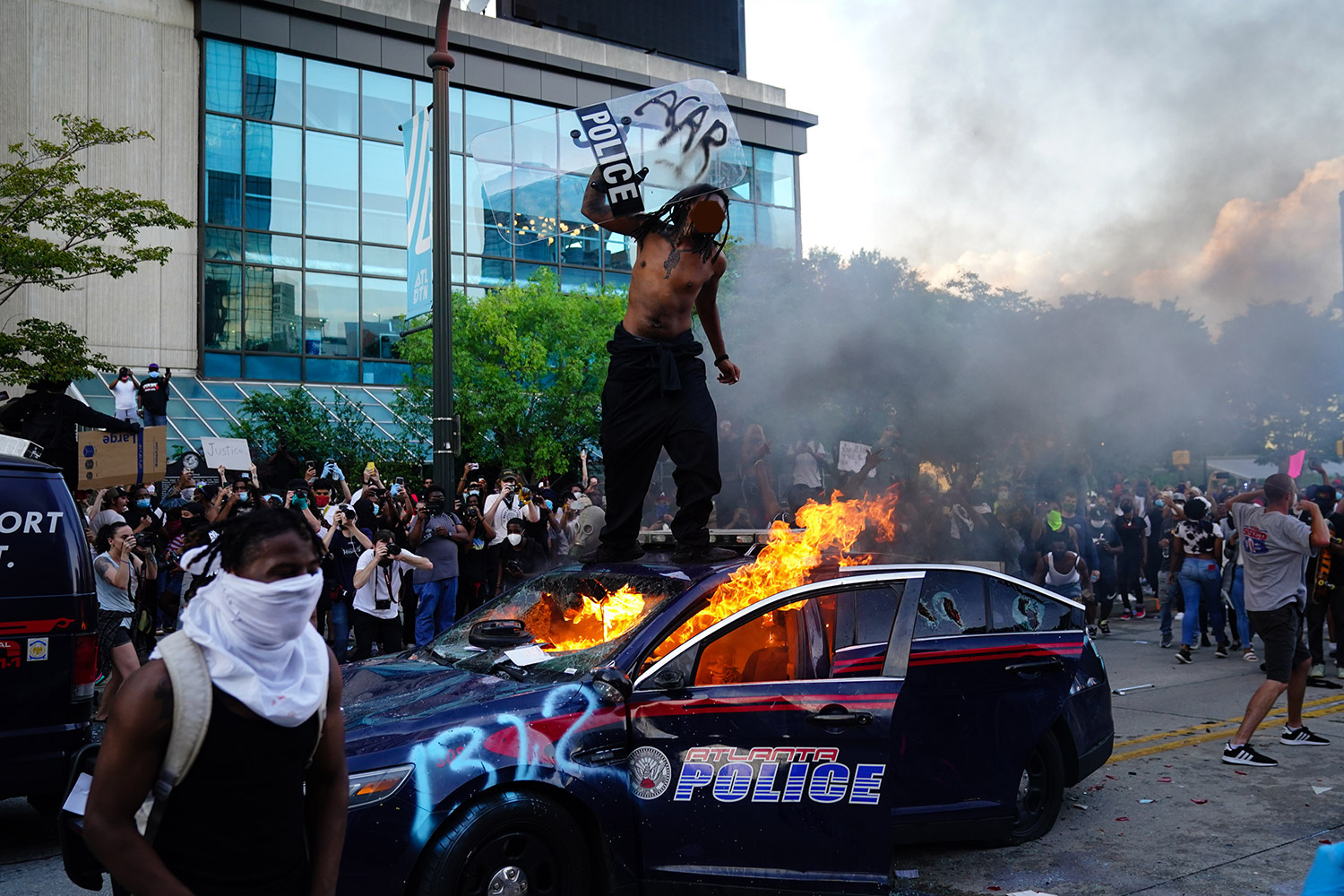 15. Unions often view police and prison guards as workers in need of protection, instead of seeing them as the armed thugs of the bourgeoisie that they are. Despite the long history of police being strike-breakers, much work remains to be done on the labor front when it comes to police and prison abolition. Without the transit workers, logistical workers, sanitation workers, medical workers and others, the abolitionist struggle is doomed.

16. Considering the low unionization rates, many workplace struggles will be chaotic, explosive, and unmediated by unions or any other kind of official organization. Unions will come in and attempt to control them and co-opt them. Can the struggles in the workplace feed back into the struggles in the streets? If they do, we will enter a new phase of struggle.

17. In order to reconsolidate its power and prevent revolution, the bourgeoisie scrambles to grant reforms and concessions. Some police get fired and charged; the budgets of some police departments get cut; some schools and universities cancel their contracts with police; some  racist statues are removed; Trump signs an executive order providing more resources for police accountability; the Minneapolis City Council votes to disband its police department. This sequence follows a common pattern in capitalist history – the ruling class responds to revolutionary crises by reorganizing and restructuring itself in a way that allows it to stay in power.

18. What must be done through the self-activity of the proletariat, other elements of society are attempting to do through petitions, voting, legislation, and policy change. Reforms are a commendable goal in a racial capitalist system that clearly prioritizes policing over life. However, we must keep in mind that bourgeois society wants to keep this rebellion as narrow as possible: making it only about George Floyd, about slashing police budgets and redistributing the budget to other areas of society. But this rebellion is about something much more. It is about the deep injustice felt by a people which no amount of reform can extinguish. 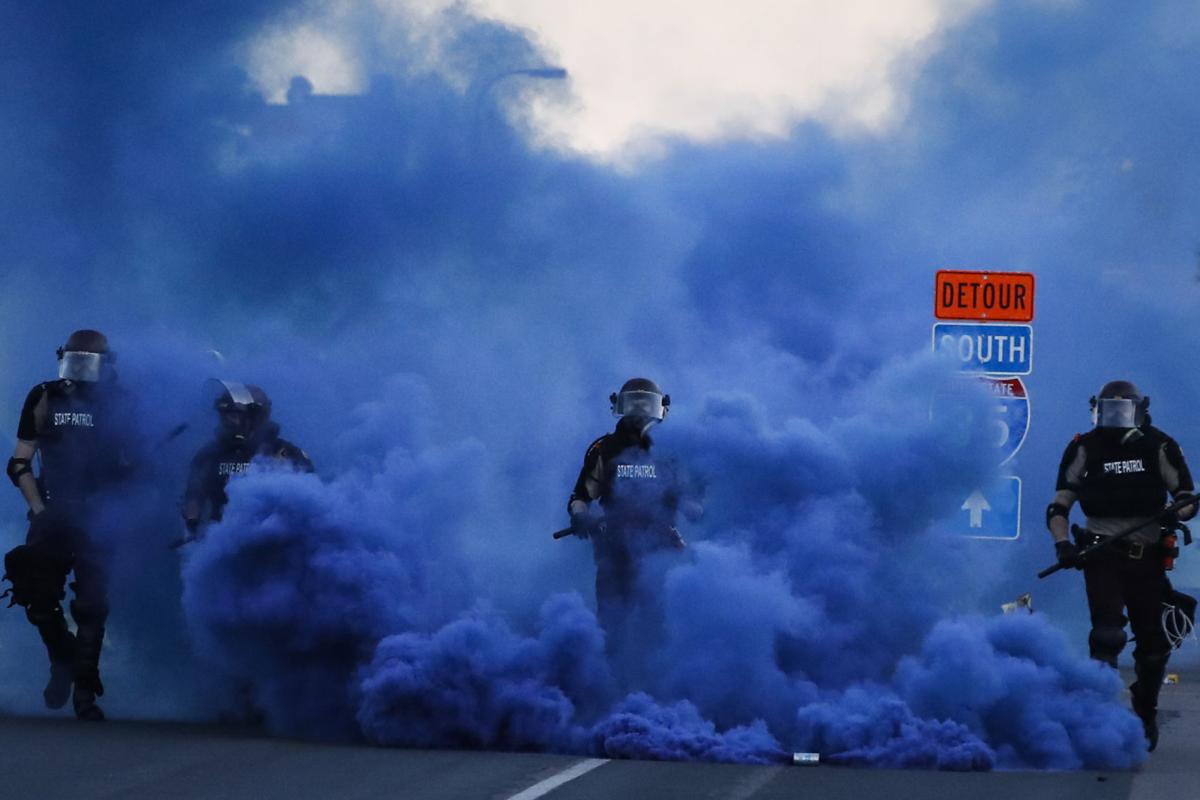 19. Abolition entails the material destruction of the range of policing infrastructures built during the era of racial capitalism. Abolition occurred from May 26 to June 1st. As a result of widespread rioting, more has happened in a week to discredit and limit police power than has occurred in many decades of activism. Here we see the potential of abolition in its fullest sense, opening up a brief moment of solidarity between the different racialized fractions of the proletariat, causing a national crisis, and cracking open the door to a new world for a brief moment.

20. Not everything that took place during the uprising was empowering and liberating. The same problems that existed before, continued during the rebellion —racism, transphobia, homophobia, competition for meager resources. All of that doesn’t suddenly disappear in a rebellion. The crucial work of building a new world remains to be done.

21. We have yet to answer the full meaning of this rebellion. Is the content of Black Lives Matter only about those who are racialized as Black or does the Black struggle take on a larger content?

22. Comparisons of this rebellion to 1968 are wrong. This rebellion is different on many levels. It is Black mayors and Black police commissioners who govern in many cities. It was a multi-racial proletariat which rebelled.

23. Can the Black proletariat lead the other racialized fractions of the proletariat in the upcoming years? This is a question that goes back a century with Du Bois, Haywood, James, Jones, and Hampton all trying to devise various coalitions with other fractions in this country or overseas in an attempt to defeat racial capitalism and empire. They all knew that the Black proletariat could spark a broad rebellion, but could not defeat its enemies on its own.

24. The unification of the proletariat in a common struggle to eliminate capitalism is the only hope humanity has of saving itself and the earth. This counter-power is based on all people coming together to fight against racism, patriarchy and everything that capitalism brings with it.

25. The desire for multi-racial solidarity is always fraught, as the histories of racism have shown. The development of solidarity will be tense, difficult, and will depend on objective circumstances and strategic choices. Of greatest concern is that solidarity might come at the expense of Black liberation. To prevent this, efforts must be made to respect and support the autonomy of the Black revolutionary struggle.