Since the beginning of the Yellow Vests movement, these mysterious ‘Yellow Letters’ have been circulated at roundabouts and over social media. Accurate and poetic as ever, this 17th missive attacks both the standardization produced by globalization and the fictional identity promoted by those above.

“Over the past few days the verbal escalation has reached its terminus. The contradiction between the reality from above and the reality from below has been set out clearly: there is Evil and there is Good! We are Evil, they are Good! Those above preach to us about the “free world”, inventing imaginary enemies to ensure the triumph of their logic. “We want freedom of expression”; “We want to defend the right to protest”; “We want to respect all opinions”, they say! They use these ideological tirades to adorn themselves with virtues, while concealing the real nature of their actions! They are talented magicians, but their tricks aren’t working anymore. We Yellow Vests can see the iron fist beneath the velvet glove.

This standardization produces remarkable identities that are ever more distant from life as it is lived from below. The European Union is merely the last Russian doll in this system. It swallows up the various States and subjects them to a methodical unification. These same States had already effaced all local peculiarities in order to merge them into large national entities. Statists and pro-Europeans both suffer the same syndrome, since they are equally bent on destroying the worlds from below. It’s always about producing a unity that is ever more distant from concrete life, from local life, from practical life!

It’s not up to Brussels, Frankfurt, Paris, Berlin, or Madrid to determine the size of a tomato, nor how we should live and produce! It is not up to Brussels to decide for Paris, but neither is it up to Paris to decide for Eymoutiers, for Mont-de-Marsan, for Colmar! On the contrary, it is from below that the common rises! No two apples on the tree are identical. But according to those from above, the French apple must be the same as the Romanian one! The apple from Landes must be identical to the apples of Normandy! This undifferentiation from above is the result of an imaginary idea detached from reality. Such top-down indifference does not take into account the abundance of difference. It generates a dead and standardized life.

So we, men and women from below, we Yellow Vests, we embody particularities. We stand for character, nuance, chance. We stand for other ways of life! We stand for the rich diversity of life, and not its impoverishment! We are not here to not represent the abstraction of ‘Man as such’, detached from all familial, social, and cultural ties, this cosmopolitan, gray Man cast in a mould! We defend the rootedness of particular men and women, the fruits of that immense capacity of the living to produce variety, not insipid identity! The universe from above seeks to produce a groundless and monstrous Man. The world down below wishes to rediscover the warmth, color, and curiosity of alterity!” 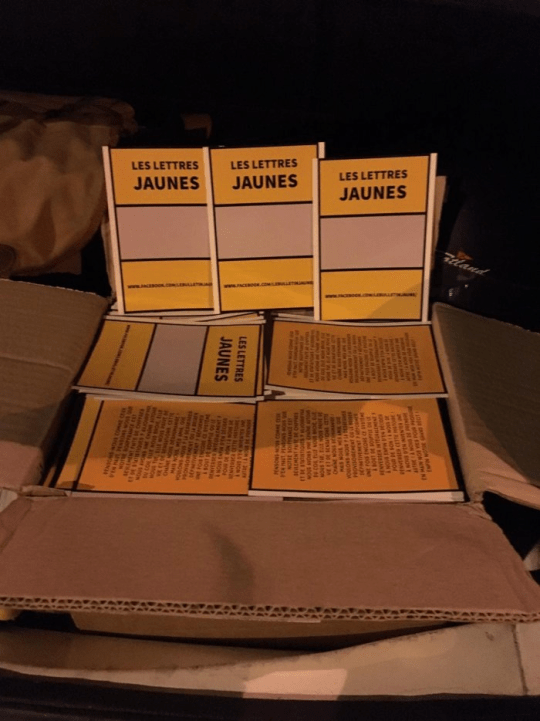 Translated by Ill Will